On June 27, 1685 Feversham attacks Monmouth’s Army at the Battle of Norton St Philip.

During the night Monmouth had deployed out-guards and set-up a barricade into the town. This was manned by Capt. Vincent from Wade’s Regiment and by late morning, the bulk of the baggage, foot and horse marching to Frome. Only the Duke, his Lifeguards, the Artillery and Wade’s foot remanded in town acting as a rear guard. 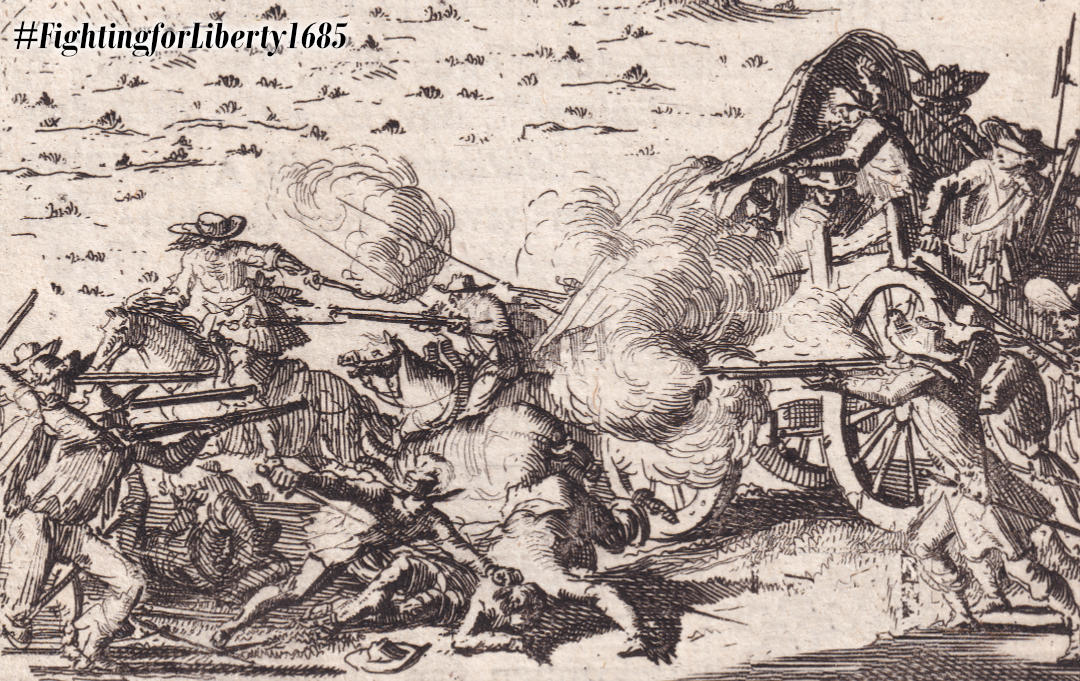 After arraying his considerable force outside Bath early in the morning, and then Feversham advanced with the vanguard of his Army under Churchill. At the front of the column was the newly promoted Capt. Lloyd with a troop of Oxford Blues, then came Grafton with Hawley’s company of Grenadiers, followed by Capt. Parker and two troops of Horse Grenadiers. Behind these came a mixed musketeer battalion under Col. Kirke. This containing the grenadier companies from the Foot Guards, Kirke’s and Trelawny’s plus musket divisions from Kirke’s and Trelawny’s, in all around 500 soldiers. These were supported by 4 troops from Lord Churchill’s Dragoons and 3 troops of Lifeguards. The main column contained six troops of Oxford Blues, three Foot Guard battalions under Sackville and three or four Battalions of Militia. The rear-guard had Sheers’ Artillery train and the remaining companies from Kirke’s and Trelawny’s under Lt. Col. C. Churchill.

At around 11, Lloyd’s men come down the lane into the town of Norton St Philip, and ride into Vincents men. After a brisk exchange, Lloyd withdraws to report to Feversham, who order Grafton to attack with the 1st Foot Guard grenadiers under Hawley. As the Grenadiers advance down the lane, a firefight develops but slowly Hawley’s push back Vincent, and assault the Barricade. However, Wade brings the rest of the Regiment up from the Manor House, and now advances against the flank of the Grenadiers. Although, pushed back Vincent reforms and now supported by Horse, the Whigs counter-attack. 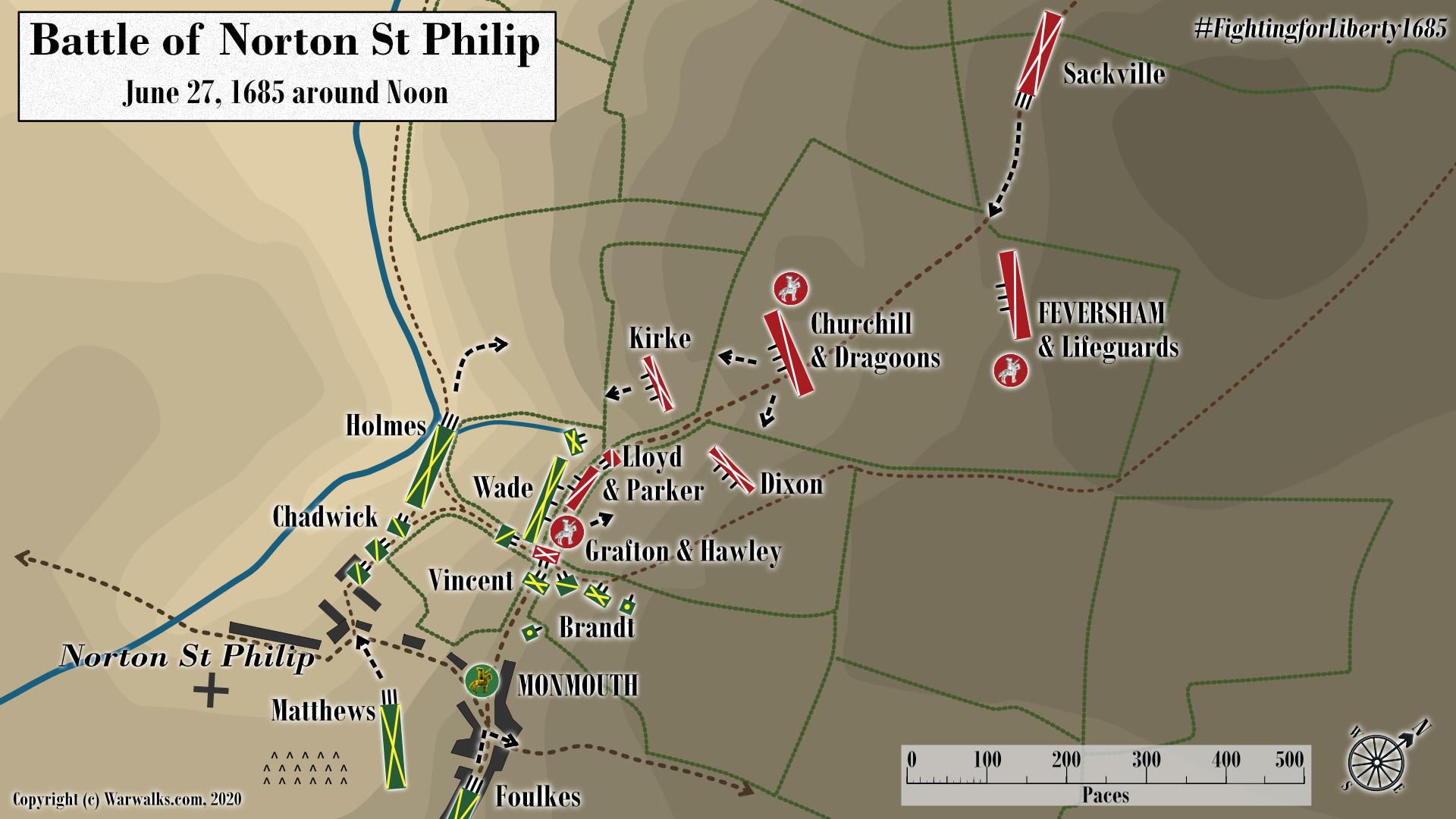 Hearing the battle unfold, Feversham orders Lloyd and Parker with the Horse Grenadiers down the lane to support Grafton. The commanded musketeer Battalion is deployed either side of the Lane and advances down hill towards the town, while Churchill deploys the Dragoons along the hedges at the top of the lane. Feversham takes up a position on the ridge over-look the town with the Lifeguards. In the lane, the melee is bloody and Grafton’s horse is killed under him but Lloyd’s men arrive just-in-time. With the Horse Grenadiers engaging Wades men in the Lane, Lloyd cuts his way to Grafton. With their right flank hard pressed, Hawley’s men cut through the hedges on the left.

Wade’s men are now in a struggle with the Horse Grenadiers when Kirke’s muskets open up on the open left flank. Wade is forced to pull back this wing of his battalion, easing the pressure in the Lane. Over on the left side of the Lane, Dixon holds back the Whigs left under Brandt, giving the remounted Grafton and the beleaguered Hawley an escape route. Behind Wade, Holmes’ Regiment extends the flank and after deploying into line, attacks Kirke. In the Lane, Vincent supported by Monmouths Lifeguards, and two companies of Scythes squeeze out the Government soldiers.

With the support of Chadwick’s squadron of horse, Holmes assaults Kirke’s men stationed behind thick hedgerows. Initially the combat is close, but on the right, Holmes scythe men cut a path through, forcing Kirke’s men to break. Behind them Churchill has lined the hedges with dismounted Dragoons and Chadwick’s horse are forced to halt their pursuit of Kirke’s men. Over on the right flank, Dixon pulls back to the top of the Lane, but now supported by two gun’s Vincent smashes his way up the Lane, to come up in the centre of Churchill’s Dragoons.

With Matthews’ and Foulkes’ foot extending the line, Churchill pulls the vanguard out of the fight. Covered by the Lifeguards and five troops of Oxford Blues, Kirke’s broken men reach the safety of the main army now deployed along the hill side. Seeing the Horse covering the enemy’s flight Holmes’ and Wade pull their forces back to the hedge row. In the centre, Monmouth reaches the top of the Lane and orders Buyse to deploy his guns, while the line is extended to face the Government Army.

As rain starts to fall across the battlefield, from the ridge line overlooking Monmouth’s Army, Feversham is reluctant to attack. With the Government rear-guard still to arrive with Sheers’ artillery train, the General can only watch as the Whig cannon open fire from the centre of their line. The enemy hold a strong defensive position, but the left flank could be turned, and the Whigs defeated. However, its not until around 3 o’clock that his own guns come up and can start throwing iron shot into the enemy ranks. 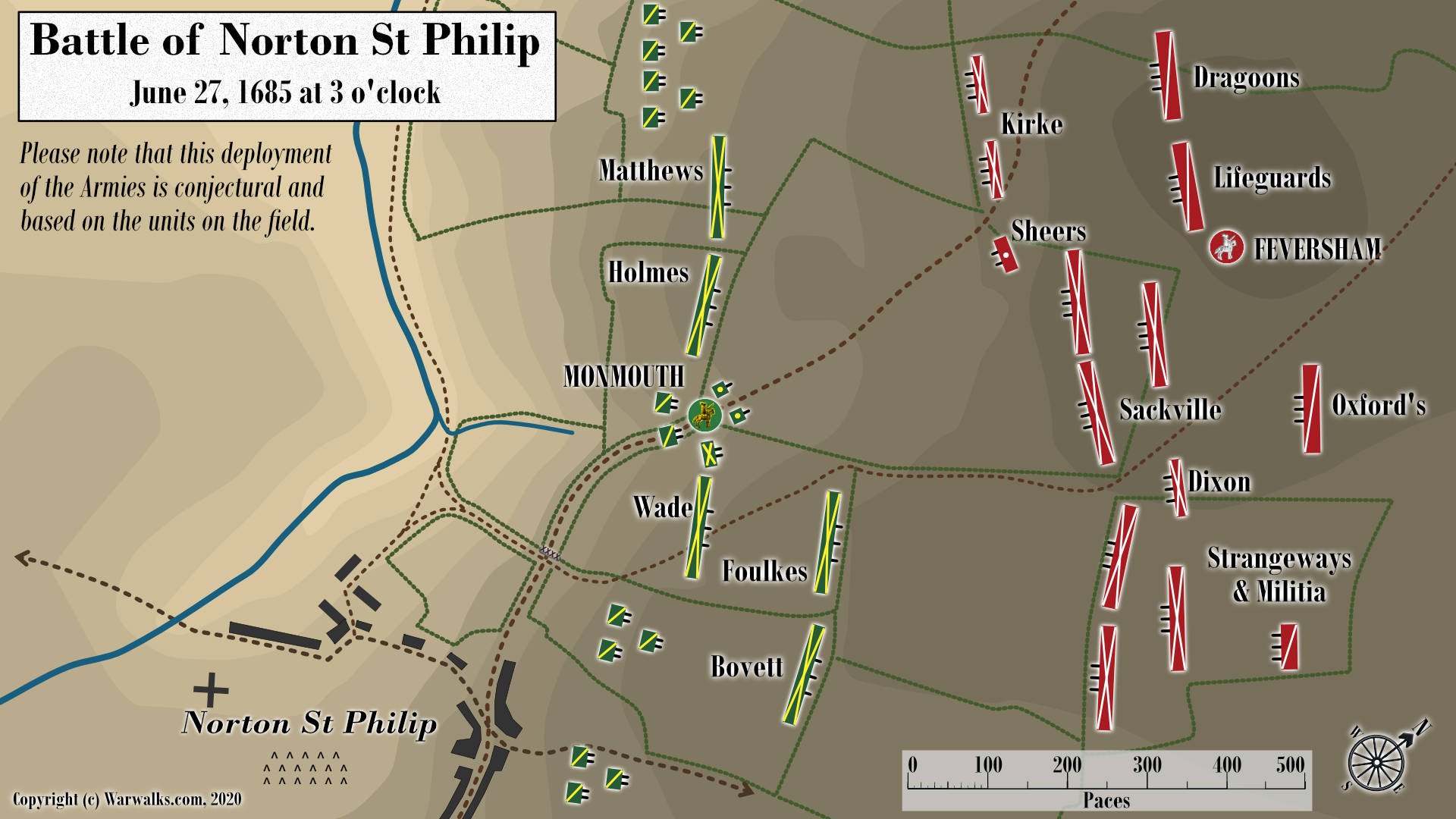 As the rain washed away the blood from the Lane, Monmouth could only watch as the Government army deployed above him. The Duke could count eight battalions of foot, against his five, but there is was an equal number of troops of horse at around sixteen, but the enemy had 8 guns to his 4 light pieces. Although, Monmouth had possibly 7,000 men, Feversham had close to 5,000 in a strong position. The Duke could not ask his men to attack uphill, against such a large force with such good cavalry, his only hope of victory was to draw the enemy down on to his hedgerows lined with muskets, scythes and pike. Here the enemy horse would be neutralised, and the enemy foot cut down. Victory would be his and the campaign all but won.

After two hours bombardment has done little damage, and Feversham ordered an aid-du-camp to find shelter and billets for the Army. As he awaited news, all thought of attack the Whigs goes as he receives the casualties figures from the earlier fight, as many as eighty Grenadiers, Dragoons and musketeers are missing, while the Horse Grenadier have lost over 60% of their equipment. By 5 o’clock Feversham learns that Bradford-on-Avon offers the best balance between security and comfort and orders his men to withdraw. To the muffled cheers of the Whigs below them, the Government Army leaves the battlefield to the Duke of Monmouth. As  Feversham turned he saw ‘a man on a white horse who was more excited than the others.’ That evening from Bradford, Feversham wrote that Capt. Parker ‘assures me [Feversham] that he saw the Duke of Monmouth who came to look at us as we walked.’

The cost of the victory was high for Monmouth, Col. Holmes was injured, while four Captain’s includes Holmes’ son and Chadwick had died. In all about twenty Whig soldiers had been killed, and another 40 lay in carts heading to Frome. They had won the Battle of Norton St. Philip, but it has lost the Whigs a critical day’s march towards London and the Army needed rest.

This account is based on a more detail description of the Battle of Norton St Philip, available from Helion & Company in the Book Fighting For Liberty.