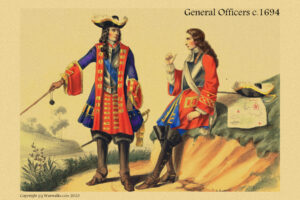 The General is to an Army, what the soul is in the body, and as nothing acts in the body but by the movements of the soul. Thus, the Regiments and parts of an Army do nothing but by orders of the General. To begin, the General should not only be a man of bravery and experience, but must possess wisdom, kindness, and honesty. However, it is his birth that will increase his authority, and the respect men give to him. These values make him fearsome to enemies, and his experience makes him so highly regarded that victory is almost certain before he has fought the battle. The General must be skilful in handling the mind of the Spy and must neglect nothing that puts off his Enemy. He must be vigilant, and fearless in dangers, and never allow himself to be blinded by prosperity. While his behaviour preserves his armies and makes them victorious. His tolerance attracts Partisans, and he wins the hearts of officers and soldiers by his honesty. The great Vicomte de Turenne was fortunate in that he had the universal friendship of all his troops and there were no officers or soldiers in his Army who would not sacrifice all for him.

On the day of battle, it is good that the General, when he rises, tells his particular friends that he had a dream, from which a good omen for victory may be drawn. In this act, he knows that they will spread the word of good fortune among his troops, and no doubt into the enemies ranks. It is these sorts of innocent tricks that make a vivid impression on the minds of the multitude. The soldiers are always the superstitious and these words give them blind credence to all they know of war. When an army is given such hope of a happy success, it always marches with joy against its enemies.

However, it is not enough that the General excites the ardour of his soldiers by his speeches and by his joy, he must also excite them by the richness of his clothes. His exterior decoration, uniform and appearance must focus the eyes of his troops upon him. This gives his men a manner of admiration, and an understanding that he proposes an extraordinary and magnificent body and mind. He must pass the tumult of the battlefield, with the style and the manner of one triumphant. As if to mirror their General, every Officer according to his dignity, must imitate the General, in his words, in his joy, and in his fine clothes.

Unfortunately, when we return to todays modern portrayals, possibly influenced by the glamour of the roguish character, our officers can sometimes appear little more than soldiers. We have lost sight that every officer, but especially a General, should at all times, look and act as a leader, never a commoner. Therefore, when at the Battle of Sedgemoor, at 1:45am on July 6, 1685 ‘the Alarm reach’d Weston, where [the Earl of] Feversham was safe a-bed, and made not so much haste into the field, as to forget setting his Cravat string at a little paltry looking glass in one of the cottages,’ this action was of a commander wishing to show his soldiers that he was in control. In fact, this very act demonstrated to his Army that there was nothing to fear but God!