This is an Account of the Execution of William, Lord Russell, leader of the opposition to the Duke of York 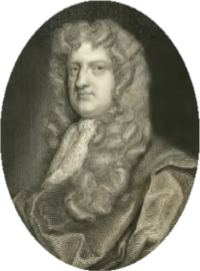 Following on from July 20th…

So, with four bells ringing out from the tower, we duly called on him, yet he was so deep asleep, that I had to gently shake-him. As he awoke, he asked me ‘what o’clock it was, I’m I late?’ but as I was preparing his things for him to dress, he fell asleep again. Now, Dr. Burnet came into the room, and woke him once again, saying, ‘What, my lord, asleep?’

‘Yes, Doctor,’ he said, ‘I have slept heartily since one o’clock’. Then he desired him to go to his wife, to say that he was well, and had slept well, and hoped she had done so. Before the Doctor left, they both prayed together for some time, before his Lordship retired into his private chamber, to prayed by himself. 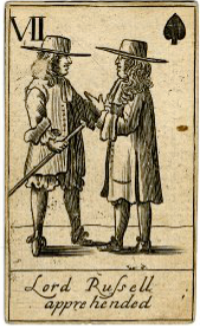 Whilst the Doctor conducted himself to Lady Russell, his Lordship dressed himself as normal, with neither more nor less care as on any other day, save only he did not lose time being shaved. His Lordship was in the mildest of good temper as he always was and thanked God, for he felt no sort of fear nor hurry in his thoughts. Then the Dean of Canterbury came to the rooms and spoke with his Lordship. As the Dean withdrew, we both looked at one another, amazed at the mild and fine temper of his Lordship. Now he handed me several letters for his relations, for he had been up some hours of the writing.  For he was in earnest than no one seek revenge for what had been done to him. Then he took up his watch, to wind it up, but the ring through which the ribband passes, broke in his hand, which he thought a little strange. Then his Lordship placed it into my hands and said, ‘I have done with time now eternity comes, I shall give you my time on the scaffold, but now it must be time for some fine tea’.

I now prepared his choice of tea, and his Lordship merrily drank two dishes in silence. Finally, about half an hour before he was to be called upon by the sheriffs, I passed him a hearty glass of sherry which he enjoyed, and then he ate a mouthful of bread. We then had notice from Captain Richardson that the sheriffs were here. With this, his Lordship withdrew once more into his private chamber, but only for a moment, returning with no alteration in his looks. As he came down, my Lord Cavendish was waiting, and his Lordship then spoke to him in great earnestness. With this act complete, we went out to his coach with all his ordinary cheerfulness.

It was a surprise to see so great a crowd outside Newgate, even though the rain was still in the air. And as we passed through this crowd, his Lordship looked about him still, and knew several persons. Some he saw staring on him, who knew him, and did not put off their hats. Quietly said to me ‘there is great joy in some but that did not touch him so much as the tears he observed in other people’s eyes. For that”, he said, “makes me tender.”

As the coach rumbled and bumped across the poor roads of London, I observed that his Lordship was often singing to himself, but I could not hear the words, so I asked him what he sang. His Lordship said “tis the beginning of the 119th psalm but I shall sing all the louder very soon.” Then seeing the large numbers on the street watching us pass, he said, ‘soon I shall see a greater and better company than this’. Then as we turned into Little Queen Street, he said, ‘I have often turned to the other hand with great comfort, but now I turn to this hand with greater’, but then he looked towards his own house and I saw a tear or two in his eye.

When we came into Lincoln’s Inn Field, he wondered to see such a large crowd and muttered as if to himself, “this has been to me a place of sinning and God now makes it the place of my punishment.” Then as it had rained a little while we were on the way, he said to us within Coach, “this rain may do you hurt that are bare-headed, if the rain should continue, for a show in a rainy day was a very dull thing.” Which made us all smile, then after all was quiet, he stepped out from the Coach and was escorted to the scaffold by the sheriffs. Now my Lordship took forth his letter and spoke to the sheriffs and the crowd; “Gentlemen, I expected the noise would be such, that I should not be very well heard. I was never fond of much speaking, much less now. Therefore I have set down in this paper all that I think fit to leave behind me. God knows how far I was always from designs against the King’s person, or of altering the government. And I still pray for the preservation of both, and of the Protestant religion.”

Then he turned to the Sheriff and asked; “Mr. Sheriff, I am told, that Captain Walcott yesterday said some things concerning my knowledge of the plot. I know not whether the report is true or not?”

Mr. Sheriff replied, “I did not hear him name your lordship.”

Then someone in the crowd called out, “NO, my lord, your lordship was not named by any of them.”

To this Lordship retorted, “I hope that is true. For, to my knowledge, I never saw him, nor spoke with him, in my whole life.” Now, returning to his paper, and continued, “in the words of a dying man, I profess I know of no plot, either against the King’s life or the government. But I have now done with this world and am going to a better place. I forgive all the world heartily, and I thank God I die in charity with all men. I wish all sincere Protestants may love one another, and not make way for Popery by their animosities. I pray God forgive them, and continue the Protestant religion amongst them, that it may flourish so long as the sun and moon endure. I am now more satisfied to die than ever I have been.”

Then turn to the Dean, he said “lets us pray together this last time” and so they knelt for a few moment, and then no rising, he spoke a quiet word to the Dean, and gave him his ring.

Then turning to me simply said “Thank you for friendship” and pressed his watch into my hand he finish, “when we are done here, remember me to those at Southampton House and Bedford House, and deliver the letters that have given into you charge.” Then he knelt down and prayed about three or four minutes by himself. 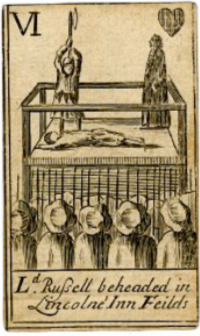 His Lordship, now threw off his periwig, which got a cold cheer from the crowd, then taking out a night-cap he had in his pocket, he turned to Mr Taunton his servant said, “Taunton you have been a faithful servant to me and I hope, if my son lives, that all shall equally serve him as long as all have me.” and then put on his night-cap, unbuttoned his coat, and let it be drawn off by Taunton. After that, he took off his cravat. All without the least single of fear or any change of countenance.

And with the same courage, after his Lordship turned to Mr  Ketch the executioner, and handed him a small purse from his waistcoat saying, “once I’m laid down, I will give no sign, so please take me swiftly to my God.”

Then he laid down, but then someone from the crowd shouted “make a lane, that the Duke of Albemarle might see” upon which his Lordship looked full that way.

But when he had lain down, I looked once at him, and saw no change in his looks, and though he was still lifting his hands, there was no trembling, then in that moment in which I looked, the executioners axe stuck. Yet, his Lordship head did not fall, but at the second stroke, Mr Ketch cut his head clean off. I now set off to delivery his letters, including this one to the King.

This all I can remember between his Lordship, William Russell and me on this rainy 21st July ’83.