This is the Account of the last night of William, Lord Russell, leader of the Whig party, the only opposition to the Duke of York’s faction 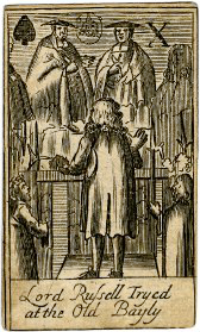 I shall not go into all the detail of the Rye House plot in this Account, other than to say that it was the fantasy of three men by the names of Josiah Keeling, John Rumsey and Robert West. For they had hatched a ‘plan’ to kill the King and the Duke of York, and together with Dr Ferguson they then schemed, plotted and wove a web around the members of the Green Ribbon Club. Then they cajoled and falsified the words of each, to entangle, trap the rest, whilst making their plot bigger and bolder. Finally, once the fine silk threads of their plot had touched every member of the opposition, including my Lord William Russell and my Grace, the Duke of Monmouth. Now they pulled the silk thread and sprang their trap.  For they are in the pay of the spider James, Duke of York and now with no crime having been committed; no attempt on any life having been made, they turned King evidence. Within days, all the leading members Kings opposition found themselves in Newgate. Some, like the slippery William, Lord Howard and weak Ford, Lord Grey also turn Kings evidence, adding their weight to the ‘plot’. Alas, over the next month, all those that opposed the Duke of York, either flee to the United Provinces or lose their heads. Until, this evening, only one man remains in this prison, his Lordship and my friend, William, Lord Russell.

His trial for high treason, was through association. It was purely based on the hearsay word of two witnesses, the duo Rumsey and West, both of whom reference the other as the hearsay provider. Even the conspirator, Lord Howard, did not sink so low as to add anything against his Lordship. Yet, this remarkable lack of substance was enough for the King’s most trusted creature Judge Jeffreys, to declare his Lordship, “Guilty! And you shall be executed, by beheading on a scaffold, to be erected near your home, in Lincoln’s Inn Fields, this 21st July ‘83”.

Now this evening I wait on my lordship and Lady Russell, for Newgate is a damp and sad place without friends. Towards supper time, my Lady makes to rise and leave but my Lordship speaks out “no, Rachel, please stay and sup with me, let us eat our last earthly food together.” 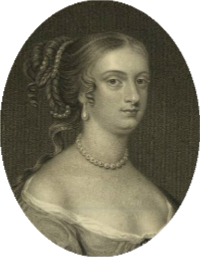 With this I prepared the extra place at his table and fetch a chair for her Ladyship and fetch the meal. Sitting close together they ate and talked very cheerfully on various subjects, particularly of their two daughters and son. I heard him mention several passages of dying men with great freedom of spirit. Then during this last supper, he bled at the nose, which he was wont to do, on which he said to us both, with a smile, “I shall not now let blood, for I shall do that tomorrow,” with which he drew out a handkerchief and stopped the flow. Yet, I could see a sparkle of a tear in her Ladyship eye.

Finally, with the supper over, they took some final time together, whilst I looked for her Ladyship’s coach. On my return, on hearing the rain pounding hard outside his Lordship declared, “Such a rain tomorrow will spoil a great show, which is a dull thing on a rainy day.”

With this he took his wife by the hand, and said softly to her, “Rachel, my love, this flesh you now feel, in a few hours, must be cold, but my love will stay forever warm. Yet, I fear that it’s now ten o’clock and you should leave this damp and dark place and sleep well in your bed, as I will in mine, we must now be parted on the earth.”

Then they kissed four or five times and I could see that she governed her sorrow. For she knew that the sight of her distress, would add greater pain to this final separation. Thus, they parted not with sobs nor tears, but with a composed silence and for they both understood any more would destroy the other, for she wishing to spare the feelings of the husband, and the husband of the wife, they both restrained their great sadness.

When she was gone, he said, “Now the bitterness of death is past, I can be resolved for the future.”

Then his Lordship, turned to me, with a tear in his eye, and spoke tenderly, “I shall regret only one thing on leaving this earth, and that is being parted from my dearest Rachel, yet it was such great a blessing that she had such magnanimity of spirit, for it would have been a misery for me, if she had not.”

Then he sat at his table, with pen, ink and a supply of paper and started to write his final words and letters.At about twelve my Lordship, on hearing the still heavy rain outside, turned to me once more and said, ‘I do hope that this poor weather does not spoil our show tomorrow, for it is time now for me to retire to my chamber, to undress and sleep but before you get Captain Robertson to lock me in, please wake me tomorrow at four.’

“Yes, my Lord, and do not worry on this rain, for you have done far greater things, in far worst weather than this, I bid you a good night”, and with this I left to fetch the Captain. I then sat down in that sad dark place, listening to the sounds of the night, that you only hear in such a place as this. So, in sober contemplation, I now awaited the fourth bell.

In my next, I shall give an Account of the execution of this friend and noble man.